Please read one of my short stories for your Christmas entertainment: https://www.mtls.ca/issue21/bakar-mansaray/
Posted by Mandingo Scrolls at 16:49 No comments:

'An African Rigmarole' my upcoming novel. Bamiwole Aberdeen has a secret, one which has been kept for thirty years from his wife, his three children, his workmates, and his friends, including the journalist Salakoh Metzger. It is Metzger who stumbles upon Aberdeen’s secret and sets out to reconstruct the unknown biography of this eminent, upright man... 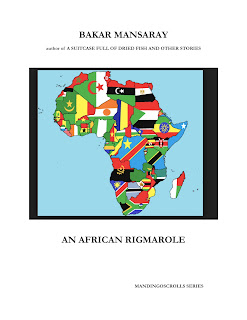 Posted by Mandingo Scrolls at 05:34 No comments:

Bakar Mansaray in Stittsville: Please click on the web link.


https://stittsvillecentral.ca/john-w-egan-and-bakar-mansaray-launch-next-chapter-in-angel-and-mercy-series/
Posted by Mandingo Scrolls at 19:23 No comments:

Bakar Mansaray and John Egan's book launch for their novel, 'The Ebola War', at the Stittsville Library, Ontario, Canada, on Wednesday, 17 July 2019. 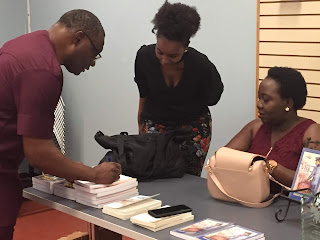 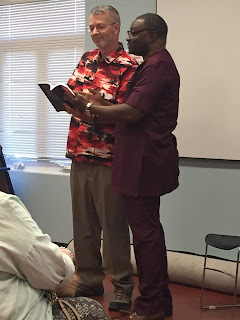 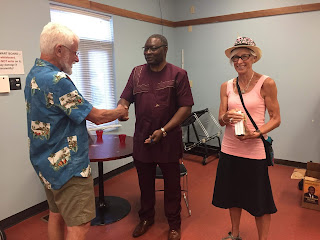 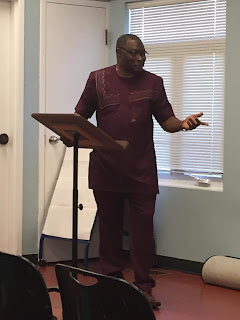 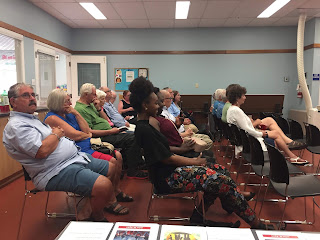 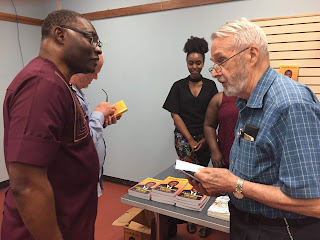 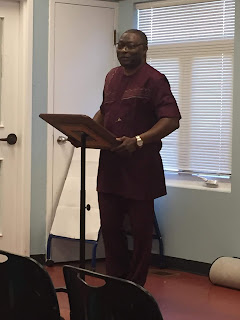 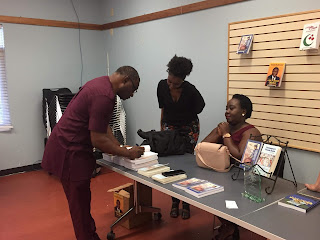 Posted by Mandingo Scrolls at 12:09 No comments:

Bakar Mansaray and John Egan will hold a book launch for their novel, The Ebola War, at the Stittsville Library at 1637 Stittsville Main Street, K2S 1A9, on Wednesday, 17 July, from 6:30 to 8pm.
The Ebola War is the second novel about Angel and Mercy. John’s first novel, The Ceasefire War, was set in 2001 Sierra Leone when Angel and Mercy were child-soldiers. The girls wanted to surrender so they could stop fighting and stay together, but were instead separated. They had to fight the rebels they had served, the agencies that would keep them apart, and the child traffickers who pursued them in order to find peace, they hoped.
The Ebola War is set in 2014 Sierra Leone. Angel and Mercy are young women now, with promising careers, but without histories or families. Plans to deal with a painful legacy of their rebel youth are disrupted by the Ebola Crisis. Their hidden past and hopeful future start to unravel when they are sent to help contain the outbreak. As the epidemic worsens, threats emerge that are as deadly to them as the Ebola virus. Setting this story in the midst of the Ebola Crisis is also a tribute to the Sierra Leoneans who worked hard and took daily risks to stop the spread of Ebola and to care for its victims. In effect, this novel tells two stories in one.
The girls and their stories are based upon John’s experience while he was with the Sierra Leone Army during the war in 2001. Bakar is a Sierra Leonean author who brought his family to Canada in 2001 to escape the war that John would help end.
This novel and other books by the authors are available on Amazon in paperback and ebook formats. 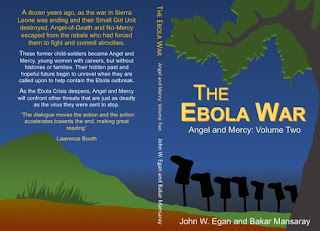 Posted by Mandingo Scrolls at 16:05 No comments:

‘Muslims in Canada: A Microcosm’

‘Muslims in Canada: A Microcosm’ not only portrays West Africans who were forced into slavery in the Americas before the slave trade was abolished in 1833 as the first unrecorded group of Muslims in Canada but also highlights the thoughts and actions of individuals in the evolution of Canadian Islamic institutions and Canadian Islamic identity. The book gives readers an opportunity to revisit earlier perception of a people whose prominence in Canada disproves the widely-held belief that they are virtual unadaptable new arrivals in the country. And this is done by tracing their origins, their integration to Canadian tradition, and how they have dealt with the many challenges they faced in the past 234 years of Canadian history, namely between 1783 and 2017.

It is maybe mere destiny that this book was published in a quadrennial after Abdolmohammad Kazemipur first published his book entitled ‘The Muslim Question in Canada: A Story of Segmented Integration.’ Kazemipur’s empirical study was an authentic nonfiction on the integration of immigrants in Western countries. His climax affirmed the fact that the integration of Muslims in Canada is presently not too questionable, especially in terms of the institutional and media domains, but more so in the economic and social domains. In 2019, as in the 2015, Canada, like most Western countries, are beginning to see Muslims as a people who are in the process of blending their religious heritage with Western cultures.

As a Muslim Canadian himself, Bakar Mansaray’s book is unavoidable. His style is objective. He narrates his 18 years observation of the situation of Muslims in Canada while acknowledging the works of many intellectuals who have written on aspects of this topic over the years. For Muslim immigration in Canada, it would take more than two tortuous centuries, from the end of the 1775 to 1783 American Revolution until those brighter days in 2002, for the process to become more fruitful when the Immigration and Refugee Protection Act (IRPA) came into force.

Part one of the book begins with a subject that had been previously confined to the rarified world of ignorance; that is the lack of data on African-Canadian Islamic history. One that had been wiped out by the enslavement of black people in North America and the Americas as a whole. This first part of the book concludes its discussion on subjects pertaining to multiculturalism, anti-Muslim bigotry, and interfaith dialogue. Part two of the book finds itself at the crossroads of Muslim advocates, the status of Muslim women, and the paraphernalia of Islamic education.

Mansaray’s book about Muslims in Canada is different from others with its chronological approach ranging from 1775 to 2017 and the development of Muslims in Canada within the context of tradition and adaptation in a new environment relating almost thoroughly. Taking a look at the horizon in part three of the book, he predicts the future of Muslims in Canada. In this futuristic approach, a Ulysses sinking star-like undertone emerges again as in the author’s autobiography. He then analyses activities at the Edmonton Islamic Centre, Masjid Al-Omari. But his undertone has an unbelievable twist – which is up to the reader to find out.

The book’s worth is augmented with appendices like those showing the differences between a registered charity and a non-profit organization, report on racism and religious discrimination, the Canadian Multiculturalism Act, the Canadian Charter of Rights and Freedoms, and the Immigration and Refugee Protection Act. Part of the book’s acknowledgement states that “I have made a diligent endeavour to acknowledge my indebtedness to those intellectuals in the comprehensive Bibliography section of this book.”

The author’s objective reporting style is appealing. Mansaray may not have exhaustively covered all aspects of Muslims in Canada even though he claims the book is about the past, present, and future existence of Muslims in one of the largest multicultural democracies in the Western world. However, the book presents a cherished and charming insight into the importance and significance of building on Canada’s common interests and relationships through enlightenment rather than misconceptions.

As nonfiction books go, ‘Muslims in Canada: A Microcosm’ may not have the miraculous and mind-boggling nature of the Holy Qur’an’s unique style or the historical-type aptitude of Sylviane Diouf’s ‘Servants of Allah: African Muslims Enslaved in the Americas’, but there is something essentially typical about Mansaray’s ability to write a book only a mind as brilliant as the author’s can narrate.
Posted by Mandingo Scrolls at 07:30 No comments:

Coming out soon! A novel published by myself, Bakar Mansaray, and John W. Egan. 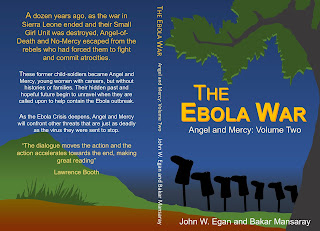 Posted by Mandingo Scrolls at 18:21 No comments:

Mandingo Scrolls
BAKAR MANSARAY is a Sierra Leonean - Canadian author whose works have appeared in the Sierra Leonean Writers Series, Maple Tree Literary Supplement, Ayebia African and Caribbean Publishing Specialists, Edmonton’s 'Diversity' magazine, Vancouver’s 'Patriotic Vanguard', and 'Christian Monthly Library (West Africa)'. The author of two peer-reviewed articles, a book of short stories, an autobiography, a novel, and a book of historical non-fiction, Mansaray was the recipient of Writer-of-the-Year 2017, Afro-Canadian Heroes Award. He is founder of the Mandingo Scrolls Series and a member of the Writers' Guild of Alberta. Mansaray holds a master's degree in Business Administration. He divides his time between Ottawa and Edmonton, Canada.